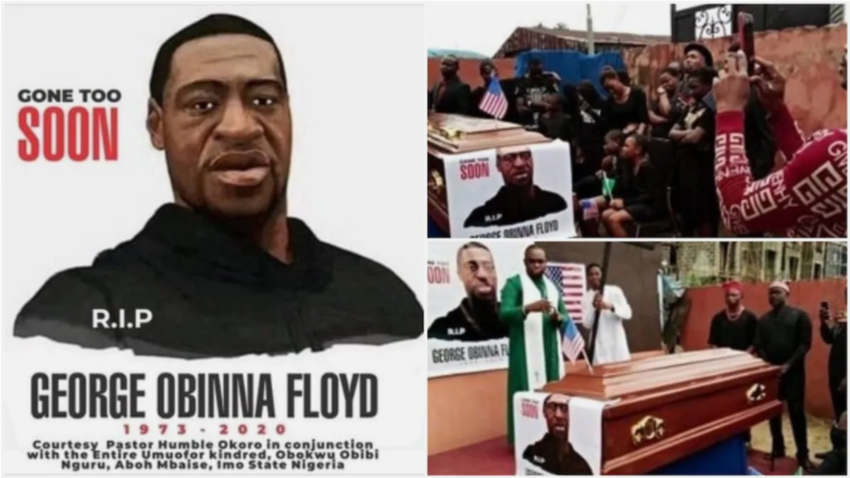 – In his interview with the media, the cleric said that he is delighted that he was able to give him a resting place where his ancestors are;

A Nigerian clergyman, Pastor Humble Okoro, has carried out a funeral service for late George Floyd in Mbaise, Imo State. Leadership reports that Pastor Okoro said he had done his homework of tracing the root of the late American’s root to Imo state. “I have traced the ancestral root of George Obinna Floyd to Umuoffor kindred in Obokwu obibi Aboh Mbaise Imo State and I feel so happy now that we have reburied him alongside with his ancestors,” he said.

Recall that prosecutors brought forward new criminal charges against the four policemen implicated in the death of Floyd. One of the officers was already being held in custody over the death of the 46-year-old, while three more were arrested for their roll in the murder. Attorney General Keith Ellison, a black former US congressman, has called for bail of $1 million for each of the four ex-officers. This comes after several nights of increasing unrest calmed to more peaceful protests. Thousands of protestors gathered near the White House, singing ‘Lean on Me’ before chanting anti-police sentiments.

Numerous major cities have scaled back or completely lifted the curfews that were imposed over the past week. Reverend Al Sharpton, one of the foremost human rights activists in the US, gave a very moving eulogy at the late black American’s funeral service in Houston on Tuesday, June 9. He said that God looked at an “ordinary brother from the Third Ward, from the housing projects” and made him the face of a movement that would child the world. Sharpton said that what happened to the late black American man was not “just a tragedy” but that “it was a crime

In pointing at the hypocrisy of some people in authorities, he said that though they are standing and grinning in front of cameras, they are the people who are going to try to slow the justice process and Floyd’s family down.

In other related news, Darnella Frazier, a 17-year-old black teenager, was the person who recorded the video of the murder of the black man that went viral and saw protests against police brutality and systemic racism erupt across the country. “I have seen him die. I posted the video last night and it just went viral. And everybody’s asking me how do I feel? I don’t know how to feel. Because it is so sad bro. This man was literally right here 8 pm yesterday,” lamented Frazier.