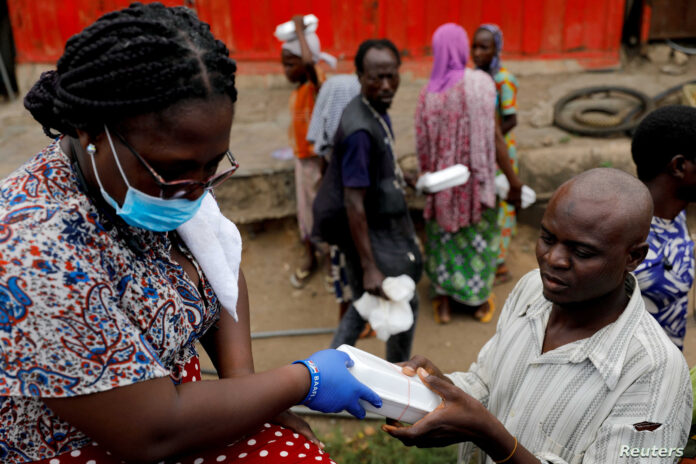 Much is being done to attend to the vulnerable and marginalised in various countries to help in the fight against the COVID-19 Pandemic.

Measures like distribution of food and relief items, hand sanitizers, nose mask, education on not touching one’s mouth, eyes and nose and securing shelter for them are few of such being implemented to help ensure the lockdown is adhered to, social distancing observed and the spread of the virus controlled. The Gender and Social Protection Minister has called for all hands on deck while advising those reading political meanings into the distribution of food and relief items.

According to the Honourable Minister, the Fight against COVID-19 is a collective effort, hence the Ministry of Gender, Children and Social Protection is doing its best to help address and tackle the situation and so then this isn’t time to go back to past issues and site examples.

She mentioned that the little her ministry have had so far is being put to good use.

Speaking with Oyerepa FM on Thursday, April 16, 2020, Mrs. Freda Prempeh, the MP for Tano North stated that it isn’t budget allocation for the Ministry of Gender, Children and Social Protection that is being used to fight COVID-19.

The MP for Tano North explained, ” We are cooking the foods in the various constituencies so it can be distributed at the doorstep of the people in the constituency.” She added. “It has been quite challenging, but we evaluate our supervision and distribution means every day.”

She called for people and institutions which can willingly help in feeding the marginalised and vulnerable, due to this hard times, to do so, as government is also committed to feeding the vulnerable every day till the Pandemic is eliminated.

She advised that those into prank calls to put a stop to that, as it is making their work of distributing food to the marginalised, physically challenged, etc. difficult for the ministry. “We want to reach out to single mothers, those living in slum areas, physically challenged, etc… They are the people we want to reach out to, they are the vulnerable people,” she stated.

She debunked Dr. Zenator Rawlings’ claim that the government’s distribution of food is based on Political lines. “Nobody is attending to this hard times on party lines because no one will have the time to be asking a vulnerable person’s political party, party card before he/ she gives food/ relief items to a vulnerable person. It is not the time for blame games,” the Gender Minister pleaded.

WATCH VIDEO: We are cooking foods in the various constituencies- MP for Tano North