The life of Nana Addo Dankwa Akufo-Addo as a politician 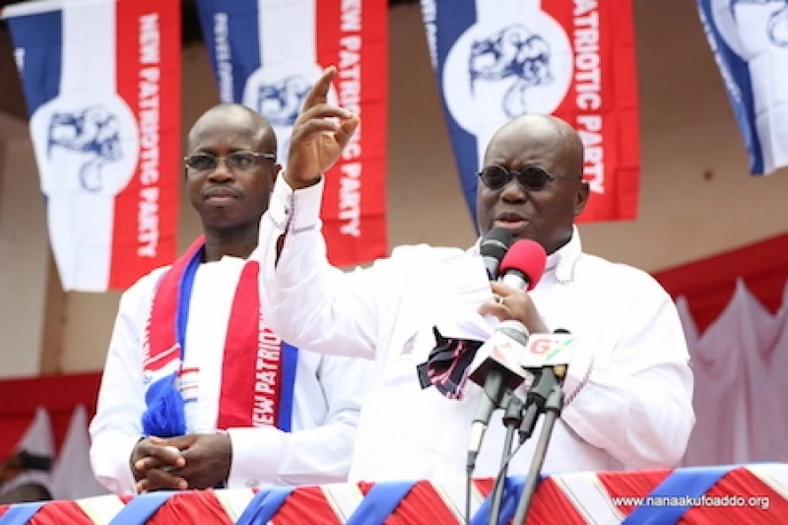 Did you know that president Nana Addo Dankwa Akufo-Addo was once a supporter of the Convention People’s Party (CPP)? Here is all you need to know about his political life and how he became a New Patriotic Party member and now a president of Ghana on its ticket.

He was born in Swalaba Accra on 29 March 1944, to a prominent Ghanaian royal and political family, Edward and Adeline Akufo-Addo.

Edward Akufo-Addo from Akropong-Akuapem was Ghana’s third Chief Justice from 1966 to 1970, Chairman of the 1967–68 Constitutional Commission and the non-executive President of Ghana from 1970 till 1972.

Akufo-Addo’s maternal grandfather was Nana Sir Ofori Atta, King of Akyem Abuakwa, who was a member of the Executive Council of the Governor of the Gold Coast before Ghana’s independence. He is a nephew of Kofi Asante Ofori-Atta and William Ofori Atta. His granduncle was J. B. Danquah, another member of The Big Six.

From the above information, it appears the president was born into politics as all the most important people around him were prominent politicians. It is not surprising that he is holding the baton now to continue the trajectory.

In his youth age as a student in the University of Ghana, he was a known vocal supporter of the Convention People’s Party (CPP) but later joined the rival UP tradition following the overthrow of President Nkrumah in 1966 after which his father, Edward Akufo-Addo became ceremonial president of Ghana in 1969.

Akufo-Addo’s participation in politics formally began in the late 1970s when he joined the People’s Movement for Freedom and Justice (PMFJ), an organisation formed to oppose the General Acheampong-led Supreme Military Council’s Union Government proposals.

In May 1995, he was among a broad group of elites who formed Alliance for Change aka “Kumepreko”, an alliance that organised demonstrations against neo-liberal policies such as the introduction of Value Added Tax and human rights violations of the Rawlings presidency.

He was in the company of Abdul Malik Kwaku Baako and Saifullah Senior minister Victor Newman, Kwasi Pratt Jnr, Dr. Charles Wreko Brobbey among others to champion the “Kumepreko” advocacies and they were joined by about 100,000 other people.

The opposition alliance later collapsed as the elite leaders jostled for leadership positions. In the 1990s, he formed a civil rights organisation called Ghana’s Committee on Human and People’s Rights.

He was a member of the 3rd parliament of the 4th republic representing the Abuakwa Constituency.

In October 1998, Akufo-Addo competed for the presidential candidacy of the NPP and lost to John Kufuor, who subsequently won the December 2000 presidential election and assumed office as President of Ghana in January 2001.

Akufo-Addo was the chief campaigner for Kufuor in the 2000 election. He became the first Attorney General and Minister for Justice of the Kufuor era and later moved to the Ministry of Foreign Affairs and New Partnership for Africa’s Development (NEPAD).

In 2007, he was the popular candidate tipped to win New Patriotic Party’s presidential primaries. In 2008, Akufo-Addo represented NPP in a closely contested election against John Atta Mills of NDC. In the first round of voting, Akufo-Addo tallied 49.13%, leading Atta Mills with a slim margin that was below the constitutional threshold of 50% + 1 to become the outright winner.

The determined man refused to give up the desire to become the first gentleman of the country. He ran again as NPP’s presidential candidate in the 2012 national elections against NDC’s John Mahama, the successor to the late Atta Mills. Mahama was declared the winner of the election, an outcome that was legally challenged by Akufo-Addo. The court case generated considerable controversy and was finally decided by the Ghana Supreme Court in a narrow 5/4 decision in favour of Mahama. Akufo-Addo accepted the verdict in the interest of economic stability and international goodwill.

In March 2014, Akufo-Addo announced his decision to seek his party’s nomination for the third time ahead of the 2016 election. In the NPP primary conducted in October 2014, he has declared the victor with 94.35% of the votes.

He started a vigorous campaign focusing on the economy, promising to stabilise the country’s foreign exchange rate and to reduce unemployment levels.

On December 9 2016, ex-president Mahama conceded defeat to Akufo-Addo who won the December 7 election with 53.83% of the votes against Mahama’s 44.4%.

He has been in office since 7 January 2017 and is currently the flagbearer of the New patriotic party seeking to be retained as president in the 2020 general elections.