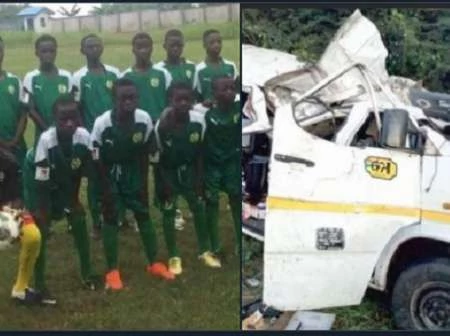 Coach of African Vision Academy based at Offinso, Augustine Mensah has said he almost took his life after his side suffered a fatal accident that killed eight of his players.

Eight out of 24 players of African Vision Soccer Academy died in a road accident on the Offinso-Sunyani Highway. According to the reports the team was returning from Kumasi following a registration process for the next colts football season and the vehicle transporting them veered off the road and fell into the Offin River and six of the players died instantly, while two were confirmed later at the hospital.

Augustine Mensah who is the coach of the U-15 team that was involved in the fatal accident on the Offinso road has disclosed how he felt following the incident.

“I was actually worried, I nearly took my life at the scene thinking of what the parent’s reaction will be,” Augustine Mensah told the media when the Director-General of the National Sports Authority (NSA) Professor Peter Twumasi paid a visit to some of the victims of the accident.

He added that despite the unfortunate, incident, he is not going to quit coaching

“In life there are setbacks but if you ever faced one I don’t think you should let it swallow you up,” Coach Augustine Mensah said to encourage himself.

The football fraternity including FIFA, CAF, GFA has mourned the death of the accident victims.

Funeral rites for four of the late colt players will be observed on October 1, 2020.