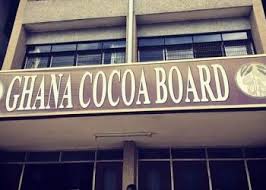 Ghana Cocoa Board has refuted a claim by members of Ghana National Cocoa Farmers Association that Board has not been involving them in the determination of producer price of Cocoa.

According to the president of Ghana National Cocoa Farmers Association, Mr. Anane Boateng, the Association does not have a representative on the Producer Price Review Committee, the body that determines the farm gate price of cocoa every year.

But in a sharp rebuttal, the Public Affairs Manager of COCOBOD, Mr Fiifi Boafo, debunked the claim made by the president of Ghana National Cocoa Farmers Association, Mr Anane Boateng.
According to Fiifi Boafo, cocoa farmers are duly represented on Producer Price Review Committee, contrary to Mr Anane Boateng’s claim.
He mentioned Nana Johnson Mensah, Western South chief farmer and Nana Obeng Akrofi, a member of the Eastern Regional COCOBOD, as some key cocoa farmers who are members of Cocoa-Cofee-Shea nut Association.

Meanwhile, President Nana Akufo-Addo has announced the increment of new Cocoa producer price by 28% to ¢10,560 per metric ton starting from October 1, this year.
Addressing the Chiefs and the people of Sefwi Wiawso, Nana Akufo-Addo stated that the increment represents a hike of more than 28% over the price obtained in the outgoing crop year of 2019/2020.