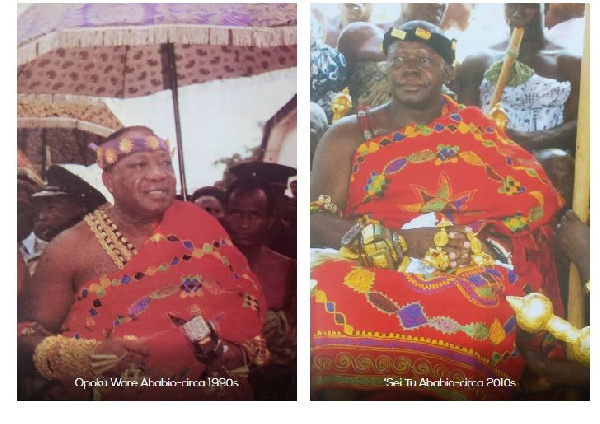 The wealthy Gold-rich people of the Asante Kingdom of Ghana are a group with a deep and intricate culture that dates back centuries ago.

Ashanti oral history reveals that even before the advent of so-called “European civilisation and education” the Ashantis had already developed the large and influential Asante Empire, along the Lake Volta and the Gulf of Guinea.

One of such innovations was their textile and fabric industry which saw the creation of the “nwentoma” or what is popularly known today as “Kente”. Kente is a type of silk and cotton fabric made of interwoven cloth strips.

Kente is made in Akan lands such as the Ashanti Kingdom, including the towns of Bonwire, Adanwomase, Sakora Wonoo, and Ntonso in the Kwabre areas of the Ashanti Region.

One of the oldest Kente cloths is still in use till date by the Asantehene, Otumfuo Osei Tutu II.

In a post which was shared on social media by Facebooker, Akwasi A Afrifa Akoto, the outfit was commissioned by Kwaku Dua Panin in the 1830s and has seen it passed down six generations down.

“How old do you think this ‘ntoma’ is? It is so old that 7 Kings have worn it-commissioned and worn by Kwaku Dua Panin(1830s), the wealthiest Otumfuo ever who begot 300 children to Kofi Karkari to Mensah Bonsu Ababio to Prempeh Panin ne Prempeh Ababio to Opoku Ware Ababio to Osei Tutu Ababio…It is worn on very special occasions…Asanteman, get ready for the Eyie Kese3,” he wrote.

It is only worn on grand events and its significance is not lost on those with an eye for antique and culture. The red cloth has adinkra symbols and icons.

Despite, Ghana being a constitutional republic, the Asantahene still plays an important role in Ghana today, symbolically linking the past with current Ghanaian politics.

Otumfuo Osei Tutu who succeeded his maternal uncle, Opoku Ware in 1999 is the 16th king to ascend the golden stool.

The Asantehene, who inherited his position along matrilineal lines, has numerous chiefs below him throughout the kingdom who acts on his behalf.

He also has many counsellors with whom he confers before making decisions.