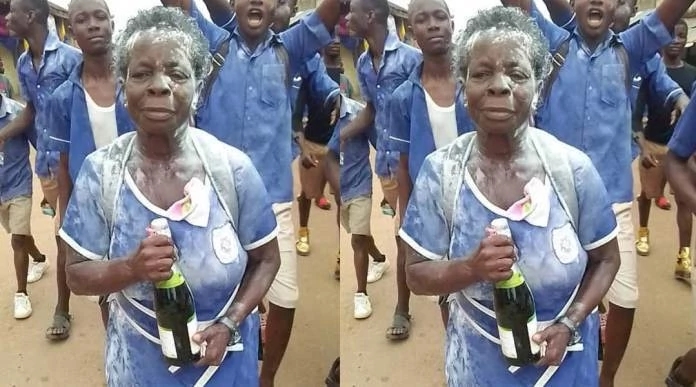 The teachers’ union donated a cash donation of GH₵1,000 to Madam Yamoah, who enrolled at Odoben Presbyterian Junior High School (JHS) in 2017.

She is a mother of four and a farmer, after dropping out of school in primary-four.

She has also been appointed Ambassador for the union’s Youth Savings Account to embark upon on sensitisation to inculcate the habit of saving among students from the primary to the senior high school level.

According to the acting Manager at the Breman Asikuma branch of the STCCU, Shad Nii Kotey Djanie, the gesture was to motivate the 57-year-old BECE graduate who, despite her age defied all odds to complete JHS.

READ MORE: “I want the NPP to be remembered with Agric & Education improvement in my district” – Honourable DCE for Bosome Freho.

He said although she was vilified by some members of her immediate society for opting to go back to school instead of being at home to take care of her children and grandchildren, hence the union’s decision to support her for achieving such feet.

He stated that “This is a start-up capital to enable you to engage in petty trading while at home which would go a long way to better your life before going back to school to acquire SHS education.”

He urged the youth to take great inspiration from Madam Yamoah after graduating at 57-year-old.

“I wish to urge the youth to take great inspiration from Madam Yamoah and realise that with great determination and perseverance, one would always be able to achieve his or her long-cherished dreams…I wish to admonish the youth to overcome all distractions in order to achieve their aspirations in life,” he noted.

The mother of four, who also has five grandchildren, said she realized she had to be bold and take her destiny into her own hands to better her future.

Inspired by the free SHS policy, Madam Yamoah said she decided to take advantage of it to achieve her aspirations in life.

She stated that her last grandchild would complete JHS next year but that did not discourage her from pursuing her dreams.

“I walked straight to Odoben Presbyterian Junior High School in 2017 and was welcomed by Samuel Quaye, the Headteacher of the school when I informed him of my intention to attend school,” she noted.

According to her, she will hit 60 years before completing her SHS education but was hopeful that she will be considered by the government and admitted into a nursing school.