6 Nigerians accused of committing fraud worth over $6 million 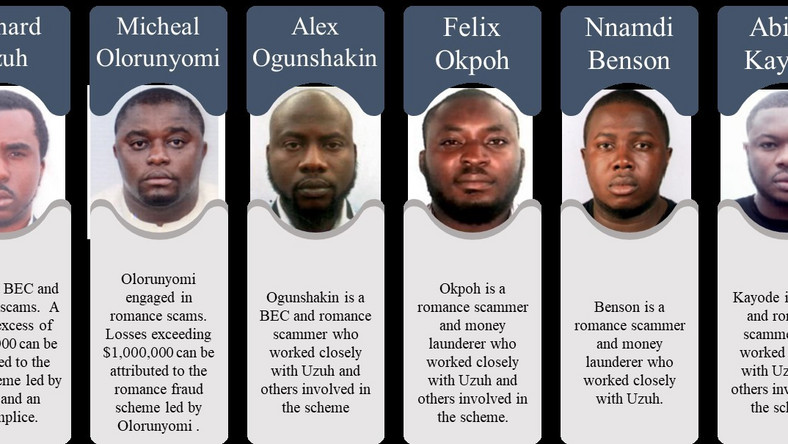 The six accused scammers are at large and believed to currently reside in Nigeria.

While also announcing the unsealing of indictments on Tuesday, the U.S. Attorney’s Office, District of Nebraska, said all six have been charged.

The accused are all at large and believed to currently reside in Nigeria.

A certain Adewale Aniyeloye was sentenced in the District of Nebraska to 96 months’ imprisonment for wire fraud while one Onome Ijomone received a 60-month sentence for conspiracy to commit wire fraud.

“If the public has any information regarding the current whereabouts of the six fugitives please call law enforcement immediately,” the U.S. Attorney’s office appealed.

The treasury department alleged that Uzuh’s scams started from around early 2015.

He allegedly obtained a list of contact information for employees at U.S. companies, and, together with co-conspirators, sent spoofed emails to the companies impersonating executives.

The 34-year-old would then request the targeted companies send urgent wire transfers for purportedly legitimate expenses, which were then often sent to accounts held by other parties.

He reportedly would often target over 100 businesses a day with such fraudulent emails.

Olorunyomi was accused of leading a scheme to victimise Americans through the use of romance fraud between September 2015 and June 2017.

The 37-year-old and his co-conspirators created fictitious profiles on dating websites and posed as individuals looking for love.

“He developed online relationships with victims to either obtain funds directly from victims or used their bank accounts to funnel fraudulently obtained money.

“Losses exceeding $1,000,000 can be attributed to the romance fraud scheme led by Olorunyomi and his accomplice,” authorities said.

Ogunsakin, 37, allegedly provided Uzuh and other co-conspirators with bank accounts that were used to receive fraudulent wire transfers; helped Uzuh to contact victims companies; and also ran his own BEC schemes.

31-year-old Okpoh similarly worked closely with Uzuh, engaging in money laundering, and providing hundreds of U.S. bank accounts that were used to receive fraudulent wire transfers from victims of BEC and romance fraud.

Benson, 33, did the same, allegedly communicating with multiple romance fraud victims to obtain their bank account details, and providing the account information to Uzuh to receive fraudulent wire transfers from U.S. businesses.

Kayode also allegedly conducted BEC and romance scams and worked closely with Uzuh and others to run fraudulent schemes.

One of the accounts the 32-year-old provided to individuals in the scheme was used to receive a $69,150 fraudulent wire transfer.

“As a result of today’s action, all property and interests in property of the designated persons that are in the possession or control of U.S. persons or within or transiting the United States are blocked, and U.S. persons generally are prohibited from dealing with them,” OFAC’s statement noted.

The case was investigated by the Federal Bureau of Investigation (FBI) Omaha Field Office Cyber Task Force, and assisted by the efforts of law enforcement counterparts from Nigeria.