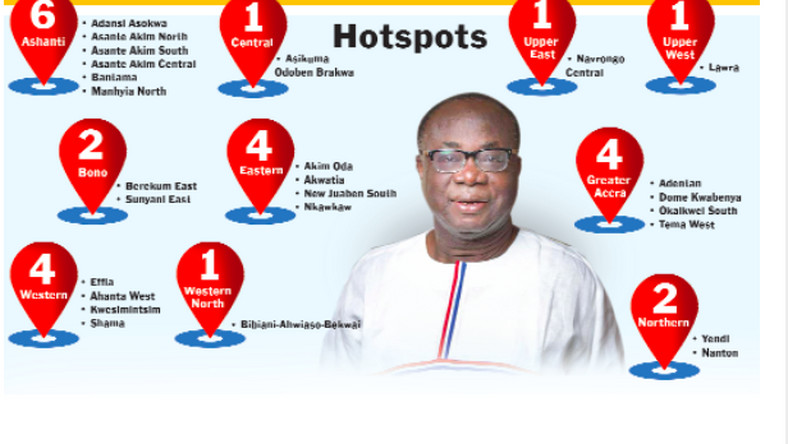 The governing New Patriotic Party (NPP) will this morning go to the polls to elect parliamentary candidates for some 100 constituencies.

This is the second phase of the NPP parliamentary primaries – it involves mainly sitting MPs contesting to be re-elected to represent the party come December 7, 2020.

According to Graphic.com.gh, even though the contest will happen across the country, some 26 hotspots have been identified.

The anticipated keen contest in the 26 hotspots can be attributed to the aspirants’ stature in politics, their influence in the constituencies, and ability to mobilise, among other factors.

The situation has also been aggravated by the wave of tension and acrimony that has characterised the filing of nominations and campaign for votes by their supporters.

Overall, 73 candidates are contesting in those hotspots.

Three constituencies have also been suspended from the primaries due to certain developments in those areas. They are Kwadaso in the Ashanti Region, Gushegu in the Northern Region, and Dormaa Central in the Bono Region.

The 26 constituencies are Adansi Asokwa, Asante Akim North, Asante Akim South,Asante Akim Central, Bantama and Manhyia North, all in the Ashanti Region, as well as Berekum East and Sunyani East, in the Bono Region.

In the Central Region, Asikuma Odoben Brakwa Constituency is the only one on the list, while Akim Oda, Akwatia, New Juaben South and Nkawkaw top the list in the Eastern Region.

In the Greater Accra Region, Adentan, Dome Kwabenya, Okaikwei South and Tema West are the places to watch. Yendi and Nanton in the Northern Region, Navrongo Central in the Upper East and Lawra in the Upper West Region,are expected to draw intense interest.

The Effia, Ahanta West, Kwesimintsim and Shama constituencies in the Western Region and Bibiani-Ahwiaso-Bekwai in the Western North Region will be centres for a heated contest.