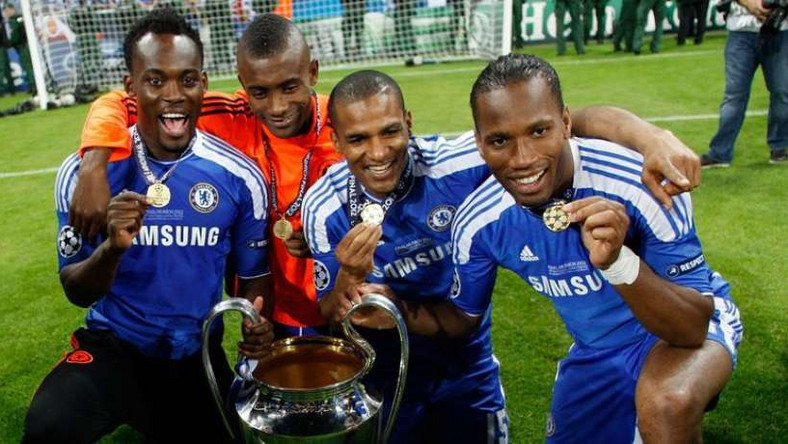 On 19th May 2012, tough-tackling Ghanaian midfielder Michael Essien and his Chelsea side won the UEFA Champions League as the Blues stunned their more-fancied opponent Bayern Munich in the final at the Allianz Arena.

Although Michael Essien was an unused substitute in the final his impact in the London club was huge, having a key member of the team since his arrival in 2005.

Bayern Munich dominated play after they created countless of opportunities, but Chelsea held them to a 1-1 draw in regulation time to take the game to a penalty shootout and they emerged the better side as they beat the hosts 3-4.

Thomas Mueller’s late header put Bayern on the brink of victory on home territory but Didier Drogba levelled things up with a bullet header at the death before coolly converting the decisive spot-kick.

The tournament which gave Chelsea their greatest agony when they lost on penalties to Manchester United 2008 in Moscow delivered the greatest glory in their 107-year history.

The momentum shifted decisively when Cech denied Ivica Olic and Bastian Schweinsteiger hit the post to leave Chelsea on the brink and present Drogba with his moment of destiny.

This was a victory in the mould of Chelsea’s semi-final win against Barcelona, built on resilience, discipline, defensive organisation and nerve at the crucial times and done without the suspended Terry, Branislav Ivanovic, Ramires and Raul Meireles.

Chelsea also emerged as the second side to win the FA Cup and the European Cup in the same season, along with Manchester United in their 1998-1999 Treble-winning season.