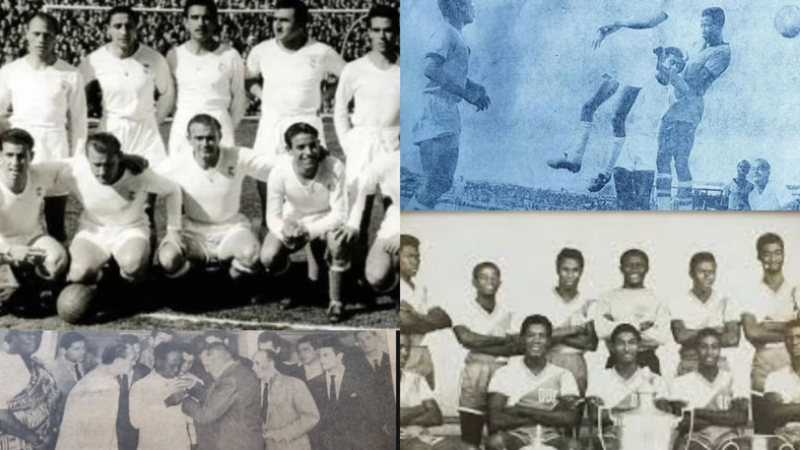 This is a never to be forgotten day for Ghana football, as the great Real Madrid team with the likes of the Ferenc Puskas and Alfredo Di Stefano landed in Ghana and played against the Black Stars in a three all thriller at the Accra Sports Stadium in front of 30,000 spectators on Sunday 19 August, 1962.

Kwame Nkrumah, the first president of Ghana believed in African Unity and he decided to use Black Stars as a tool to accomplish that, hence appointed Ohene Djan as the first Director of Sports. Through him, Ghana built a strong Black Stars that eventually won the 1963 African Cup of Nations on home soil.

Real Madrid were the finest European club side, having won the European Champions Cup on 5 consecutive occasions and were runner-up in 1962 prior to their trip to Ghana, under the leadership of Santiago Bernabeau.

However, the Black Stars thought them a soccer lesson, by matching them boot for boot and were lucky to secure the equalizer with two minutes to end proceedings.

In the 17th minute skipper Aggrey Fynn sent a beautiful pass to centre forward Edward Acquah, who with a first-time drive scored the opening goal, amid deafening cheers.

Although Addo Odametey and Franklin Crentsil were very stubborn in defence, a combination between Puskas, Bueno and Di Stefano enabled Puskas to nod in the equalizer in the 30 minute.

The tide turned once more in favour of the Black Stars in the 35 minute and it was eye pleasing to see the stalwart Black Stars boys outplay the star-studded Real Madrid side, with Aggrey Fyn displaying his perfect craftsmanship.

The wonderful performance of the Black Star paid off in the 40th minute, when Kwame Adarkwa connected Wilberforce Mfum’s pass to restore their lead.

Back from the half time break both teams renewed their energy, but it was the Stars who were on top of the game and they made some raids in front of the goal area of Real Madrid.

In the 70th minute Real Madrid reorganized and fetched the equalizer through inside right Daucik, but Ghana referee Frank Mills ruled it offside. A few minutes later Puskas was also whistled offside and during the argument with the referee he headed him in the chest. Puskas who was sent off refused to leave the field and continued to play.

It was Zoco who succeeded in getting the European giant the equalizer in the 80th minute with a thunderbolt.

The Black Stars, who were bent on winning the game played a highly spirited game as if their lives depended on this game and Baba Yara put Edward Acquah through to make the score line 3-2 in their favour, however Ferenc Puskas gave Daucik a defence splitting pass to bring the final score line level.

Real Madrid after the game paid a courtesy call on Dr. Kwame Nkrumah at the Flagstaff House.

Nkrumah thrilled by the performance of the Black Stars in their 3-3 draw against the European giants said.

“To have held the fabulous Real Madrid to a 3-3 draw is a proud achievement,” he said. “Considering the fact that the Black Stars are all bona fide amateurs, I am certain that they have compelled the soccer world to acknowledge the fact that a new soccer force has arisen along the West coast of Africa.”

“Your reputation in the field of soccer is enormous,” Nkrumah told Santiago Bernabeu

“Having given the Black Stars the opportunity to rub shoulders with you is an inspiring gesture,” Nkrumah thanked.