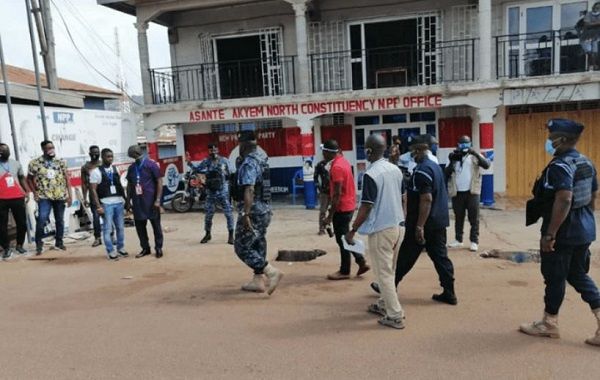 Executives of the (NPP) in the Asante Akim North constituency of the Ashanti Region Saturday defied a pending injunction application to hold parliamentary primary in the area.

Some 145 delegates of the party who claimed their names have been “unlawfully” and “fraudulently” missing from the register filed the injunction to stop today’s contest between the incumbent Andy Kwame Appiah Kubi and former MP Kwadwo Baah Agyemang.

Although the executives of the party at the national headquarters, the EC and the Police were served with the application Friday, constituency executives claim they have no knowledge whatsoever about such action against the party.

Voting thus commenced Saturday morning at all 94 polling stations within the constituency for delegates to cast their ballot with security presence.

Constituency Secretary, Williams Aboagye Boateng told our correspondent Ibrahim Abubakar that they have not been served with any injunction application, hence not aware of any action restraining them from going ahead with the polls.

“So far as we are concerned nobody has received anything from anywhere. So we know that today we are going to have elections and we are having it. The delegates are ready, the constituency executives are ready and then elections are ongoing as you can see” he told TV3.

Mr Boateng claimed the Regional Executives of the party were aware elections were going to be held in the constituency Saturday.

“If there should be any injunction whatsoever, I think we should have been served a letter or call from the NEC or from the region to indicate that yes, indeed there are some injunction on Asante Akim North elections but so far, as we are concerned, nobody has spoken to us, we haven’t received anything from anybody” he said.

Copies of the injunction has been served the party’s headquarters, the Electoral Commission, Ghana (EC), the Ashanti Regional Director of the EC, the Asante Akim North District Director of EC, Constituency Secretary, Ashanti Regional Secretary of the NPP and the Konongo Odumase Divisional Police Commander.

According to the writ, the injunction is to “restrain defendants, their servants, agents, privies or assigns or howsoever designated from proceeding with or in any way whatsoever conducting, supervising or dealing with or participating in any processes touching and concerning further activities or dealings towards the election or selection of 1st Defendant’s Parliamentary Candidate for the Asante Akim North Constituency of the Ashanti Region for participation in the General Elections in December 2020 pending the determination of the suit…, and for a further Order to 2nd Defendant not to participate in any activities towards and for the purpose of electing or selecting a Parliamentary Candidate for Asante Akim North Constituency…”

The delegates are said to be from 61 polling stations, mostly in