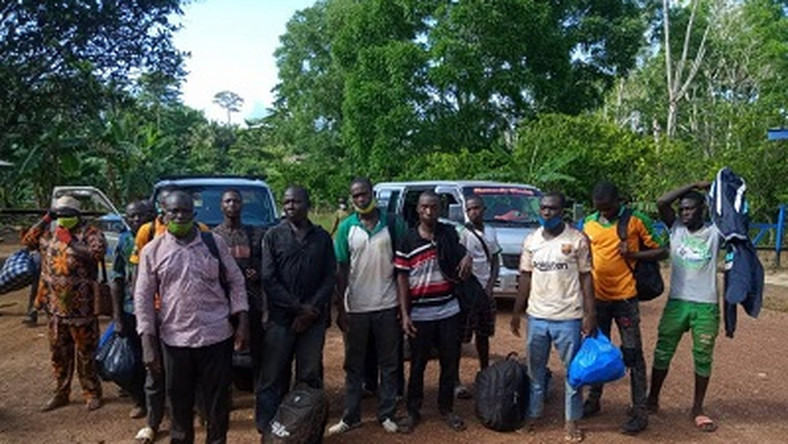 Ghana’s air, sea and land borders have been closed since Sunday, March 22, 2020, following an order by President Akufo-Addo as part of efforts to stop the spread of COVID-19 in the country.

According to President Akufo-Addo, this decision was based on the index cases of coronavirus in the country which came from abroad.

The president has subsequently upheld the decision in later national addresses and recently extended the ban to May 31.

However, this directive has not detered foreign nationals from the sub-region and other parts of Africa to enter into the shores of Ghana.

The Ghana Immigration Service has declared a full operation on this illegal activity across all borders in the country. Despite this action, some foreign with the help of locals have managed to sneak into the country.

We look at six of such instances where these foreigners have been arrested by security officials upon their entry into Ghana.

The foreigners are made up of 37 Nigeriens, four Togolese, two, Beninois and one Nigerian. They were fleeing from Tamale and Yendi, where they claimed residents were harassing them for allegedly spreading the Coronavirus disease.

The group, comprising of 22 females and 68 males were kept in isolation at the Atonsu Agogo Hospital.

3. 36 foreigners arrested in Volta Region: Officials of the Ghana Immigration Service (GIS) in the South Tongu District of the Volta Region arrested 38 persons who allegedly entered the country through unapproved routes via Ghana’s Eastern frontier in March.

The 38 persons include; 23 Nigerians, 10 Togolese, one Malian, one Ivorian, one Beninois and two Ghanaians.

They were arrested at the Sogakofe barrier heading towards Accra.

The arrests took place at the Babile inland checkpoint, Dakpla junction and on the Black Volta River, all in the Upper West Region at different occasions through regular inspection of vehicles through the GIS checkpoints.

All the arrested individuals who were Burkinabe nationals were processed and repatriated to their country.

5 . 23 foreign nationals arrested at Nankpanduri: Officers of the Ghana Immigration Service in the North East region, in collaboration with military personnel, have arrested 23 foreigners for entering Ghana illegally.

The operation by the joint security team forms part of ongoing efforts to enforce the border closure directives by government to contain the coronavirus pandemic in the country.

The arrested persons were made up of 15 Togolese and eight Burkinabe nationals.

The suspects, comprising 17 Burkinabes and an Ivorian, were all males aged between 17 and 55 years, and carried on them identity cards of their respective countries.

This brings the total number of foreign nationals who entered the Western North Region illegally and was arrested and repatriated, since the closure of the country’s borders, to 190. Source: Pulse Ghana